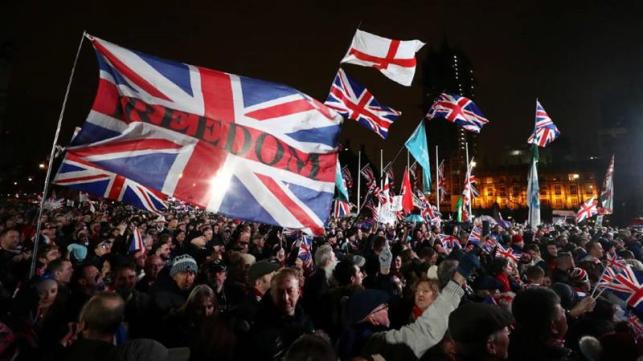 At 11 p.m. on Friday — midnight in Brussels, and 6 p.m. in New York — Britain officially departed from the European Union, 1,317 days after voting in favor of leaving the bloc in a referendum that plunged the country into a three-year-long debate over its future.

1. officially depart from 正式離開
2. in favor of 贊成…
3. leaving the bloc 離開集團，陣營（指具有類似政治利益的國家或人的群體）
4. a referendum 全民公決，全民公投
5. plunge the country into… 使國家陷入…
★★★★★★★★★★★★
While this is the official end of 47 years of Britain’s membership in what became the European Union, very little is set to change immediately. It’s the beginning of a transition period, scheduled to end on Dec. 31, during which London and Brussels must hash out the details of Britain’s future relationship with its European neighbors. Still, the moment carries enormous legal and symbolic weight.
6. the official end of… 正式的結束
7. be set to change 被設定要改變
8. a transition period 過渡期
9. hash sth out 和其他人協商共同達成
10. carry legal and symbolic weight 帶有法律和象徵的意義
★★★★★★★★★★★★
Prime Minister Boris Johnson and his cabinet began their day with a meeting in Sunderland, the city in northern England that was the first to announce it had voted in favor of leaving the European Union on the night of the 2016 referendum.
11. cabinet 內閣
12. vote in favor of 投票贊成
13. leave the European Union 離開歐盟
★★★★★★★★★★★★
It was the first of a handful of celebratory, but noticeably muted, official events to mark the day, suggesting that a pro-Brexit government is seeking to avoid the appearance of gloating. In the referendum, 48 percent of voters wanted to remain part of the European Union, and later polls suggest that number may have grown since.
14. a handful of… 少量, 少數的…
15. mark the day 紀念這一天
16. a pro-Brexit government 支持脫歐的政府
17. seek to avoid 設法避免
18. the appearance of gloating 看起來沾沾自喜、洋洋得意
★★★★★★★★★★★★
Flags line Parliament Square and The Mall, the ceremonial avenue leading to Buckingham Palace, and government buildings were lit up in the red, white and blue of the Union Jack.
19. a ceremonial avenue 禮儀大道
20. lead to 導致
21. be lit up 點亮
22. the Union Jack 英國國旗
★★★★★★★★★★★★
A countdown clock was projected onto the front of 10 Downing Street, the prime minister’s official residence, along with a commemorative light display to “symbolize the strength and unity” of the four nations of the United Kingdom, the government said.
But a campaign for a celebratory 11 p.m. chime from Big Ben — the great bell of Parliament’s clock tower, which is currently silenced for restoration work — did not succeed.
In Brussels, the three presidents of the European Union institutions gave a joint statement Friday morning, reflecting a jointly published article in which they detailed a hopeful future for the union.
23. a countdown clock 倒數時鐘
24. be projected onto 投射到
25. the prime minister 總理
26. a commemorative light 紀念燈
27. symbolize the strength and unity 象徵力量與團結
28. a celebratory chime 慶祝的鐘聲
29. restoration work 修復的工作
30. give a joint statement 發表聯合聲明
31. a jointly published article 聯合發表的文章
32. detail (v) a hopeful future 詳述充滿希望的未來
★★★★★★★★★★★★
Source: https://nyti.ms/2uSBXwd
Image source: http://bit.ly/38Vbqgk
Implications: https://cnn.it/2vB6grq
★★★★★★★★★★★★
[時事英文新聞] 10句英文幫你快速了解英國退歐 (Brexit)
http://bit.ly/328cAm5
[時事英文] Consequences of Brexit
http://bit.ly/36K7gqg
時事英文大全: https://wp.me/p44l9b-1Y8